I Read a Book for #readpawty!

Recently, I discovered a book club on Twitter. Some of my anipals were talking about #readpawty one evening and what books they had read. Well, my mom likes to read a lot and I thought this this sounded pretty cool so I asked for some more information.

The book club is led by @MaggieTKat. All of the #readpawty information can be found on her bloggy, Kruse Kats. Anipals get together every other month or so on a Tuesday evening and discuss the books that are on the list for that month.

This time, one of the books was "The Cat, The Quilt And The Corpse" by Leann Sweeney. It is the first book in a series called "Cats In Trouble." I picked this book because it had cats in it plus it sounded really exciting. This was a kind of book that neither Mom not I had heard of, called a "cozy mystery." It is the kind of mystery that's not really scary and the crime scene isn't described in a lot of detail, so even the most delicate of kitties (like myself) won't be offended. The person that tries to solve the mystery is a regular person, not a detective.

In this book, the person trying to solve the crime is a very nice lady (she owns three kitties!) named Jillian Hart. She lives in a small town by a lake and comes home one day to find one of her precious kitty cats has gone missing. She knows right away that the kitty has been stolen, but not many people want to believe her. They think she is just overreacting. Then, she finds a man dead-and guess what?-he had a house FULL of kitties! She sets out to figure out what her missing cat (along with other missing cats in the town) have to do with the man's death.

This book was a real claw-biter for a while! Then I was trying to figure out who the killer was and what happened to all the kitties. I got so caught up in trying to solve the mystery that the book was finished in no time! I liked all the people in the book, especially Jillian. She really loved cats and wanted all the kitties back to their rightful owners. How can you not like a human like that? If you want to read a really good book that has cats central to the plot, this is the book to read! 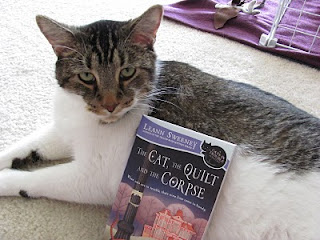 Our next meeting is in October. I think I'm going to read two books this time: "Curiosity Killed the Cat Sitter" by Blaize Clement and "Homer's Odyssey" by Gwen Cooper. Come and join us!
Posted by Sebastian at 8:08 PM