Stilwell and the Sickies

We've had a rough few days with Stilwell. The good news is he's now at home and recovering from a bout of pancreatitis. I've been a stressed out mom over it, but with a great veterinary team, things went fairly smooth. Here's the lowdown:

SATURDAY
We had been gone most of the day to take Mom to visit her sister. The cats, as usual, had full run of the house. We got home late that afternoon and everything seemed fine. All of the kitties ate dinner like normal, nothing seemed amiss.

Later in the evening I was in my bedroom and Stilwell was with me, laying on the bed. I didn't notice anything was wrong until I gave him some treats and he only ate a couple of them. Usually he inhales them and digs around in case he missed any. That is when it hit me that he was not his normal high-energy self. I tried to offer him a bite of turkey and he ignored it. That's when I knew something was wrong. Our blue boy never passes up food. I decided that I would call the vet the next morning. 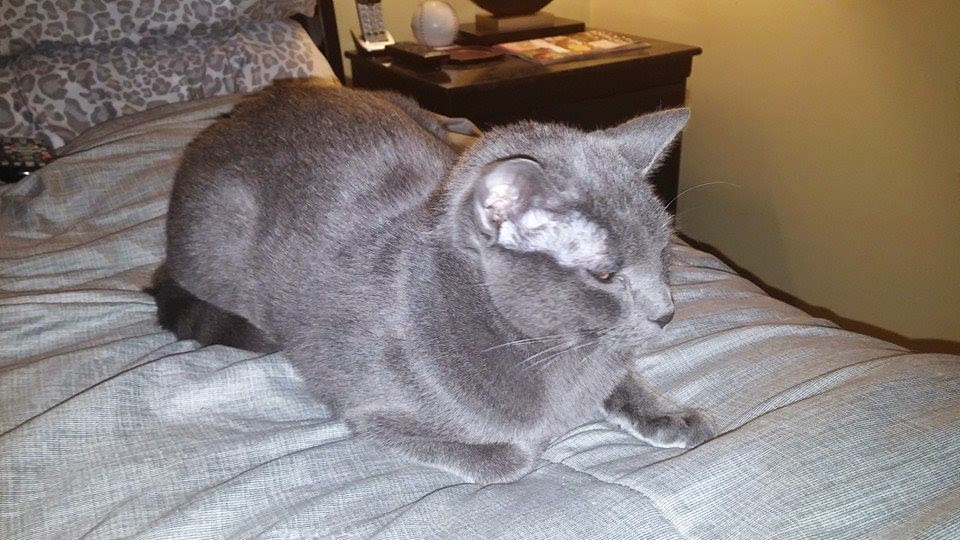 SUNDAY
Stilwell went downstairs at breakfast time, but when Lee put his bowl in front of him, he just sniffed it and walked away. The same thing happened at lunch. I called the vet, but we couldn't get in that day so we made an appointment for Monday. 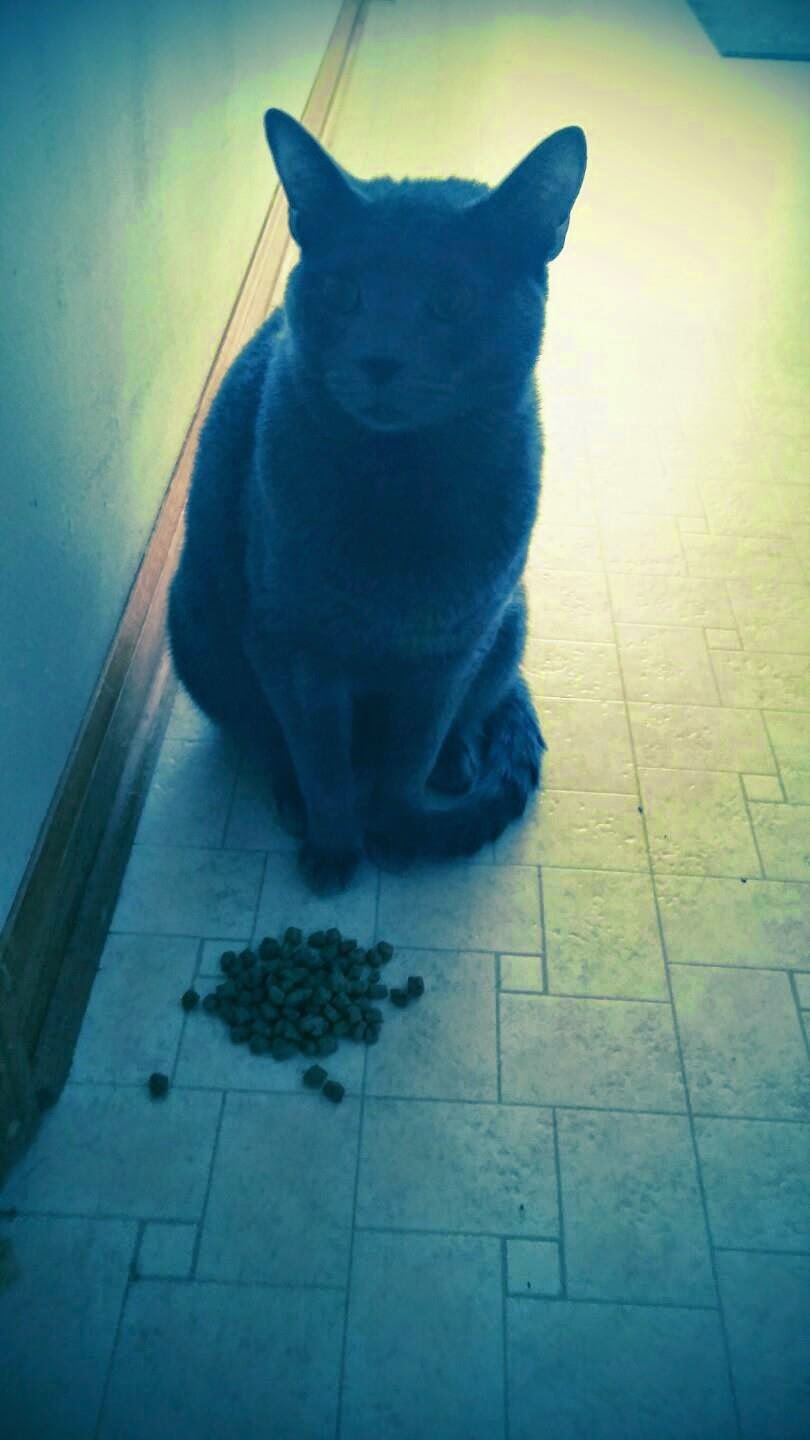 I headed to the grocery store to find something that might interest him. I bought a couple packets of Fancy Feast Broths, some meat baby food, and even crack (better known as kibble, in this case, Meow Mix).

When I got home I took Stilwell up to the bedroom so I could closely monitor his intake and output. I didn't want to have to fight the other cats off from his food, either. I first tried the kibble and was thrilled that he ate some. It wasn't much, but anything in his tummy was good. 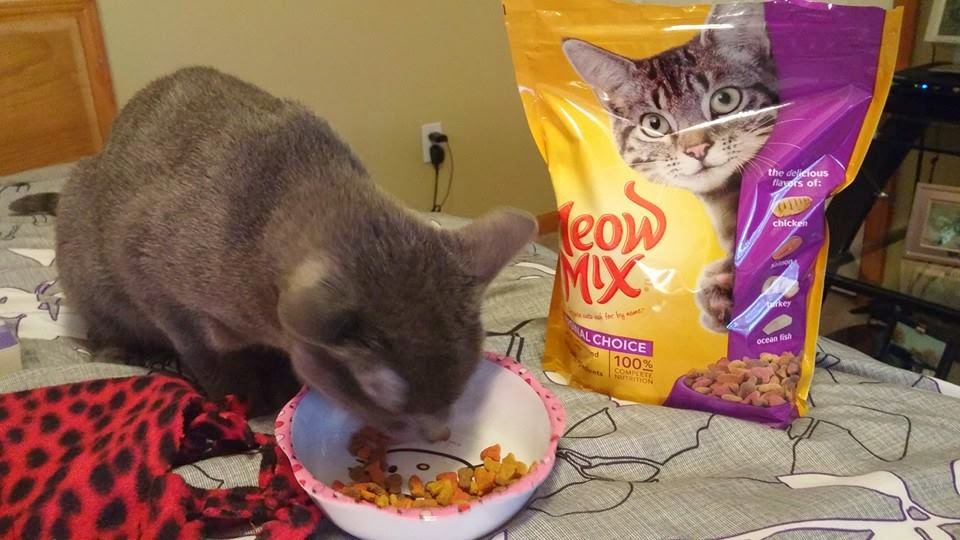 About an hour later, I opened up one of the pouches. He licked up all the broth, but didn't eat any of the meat. That was okay, too since I was worried about dehydration. He had only drank a small amount of water so the liquid from the food was helpful. 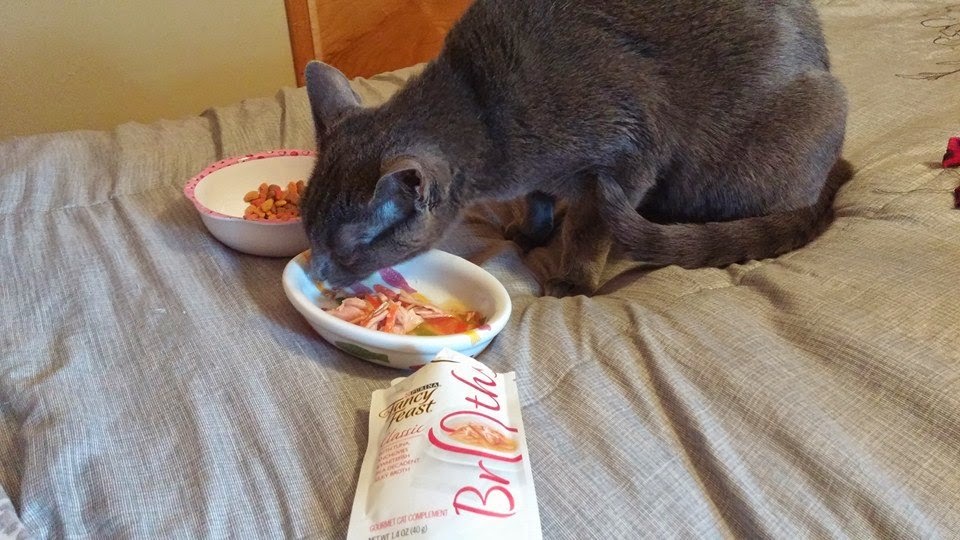 He spent the rest of the afternoon napping. He didn't even change positions much. I could tell he was running a fever, but I had no idea what to do for that. 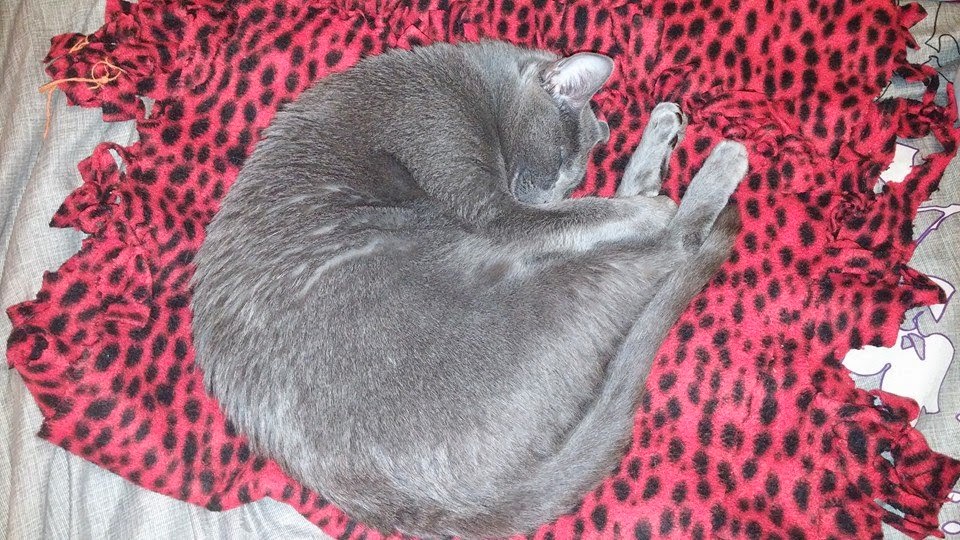 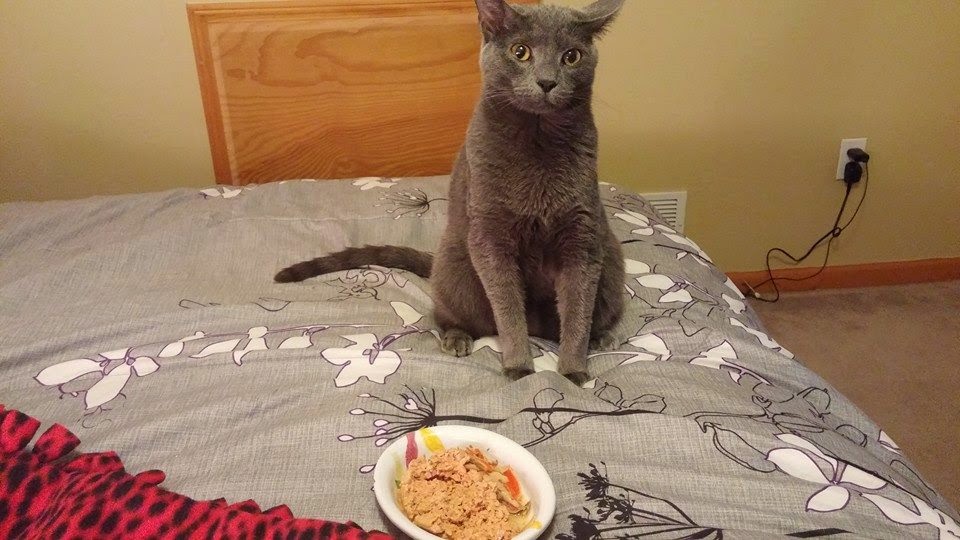 He laid back on his blankie and slept some more. Around midnight he woke up and vomited a small amount of bile, then went back to sleep. All this time, Lowenstein was outside the door, begging to come in. He cried loud and he cried hard. Being the emotional boy he is, he ended up peeing on the bathroom rug that night.

MONDAY
Stilwell drank some water and peed, which made me very happy. He cuddled with his daddy until his vet appointment at 11:30.

When we got to Banfield, Stilwell's favorite vet tech, Andi, took his temperature and it was quite high: 103.9. She went ahead and ordered bloodwork and urine and suggested the vet may want to do additional tests like x-rays and the test for pancreatitis (which she did). 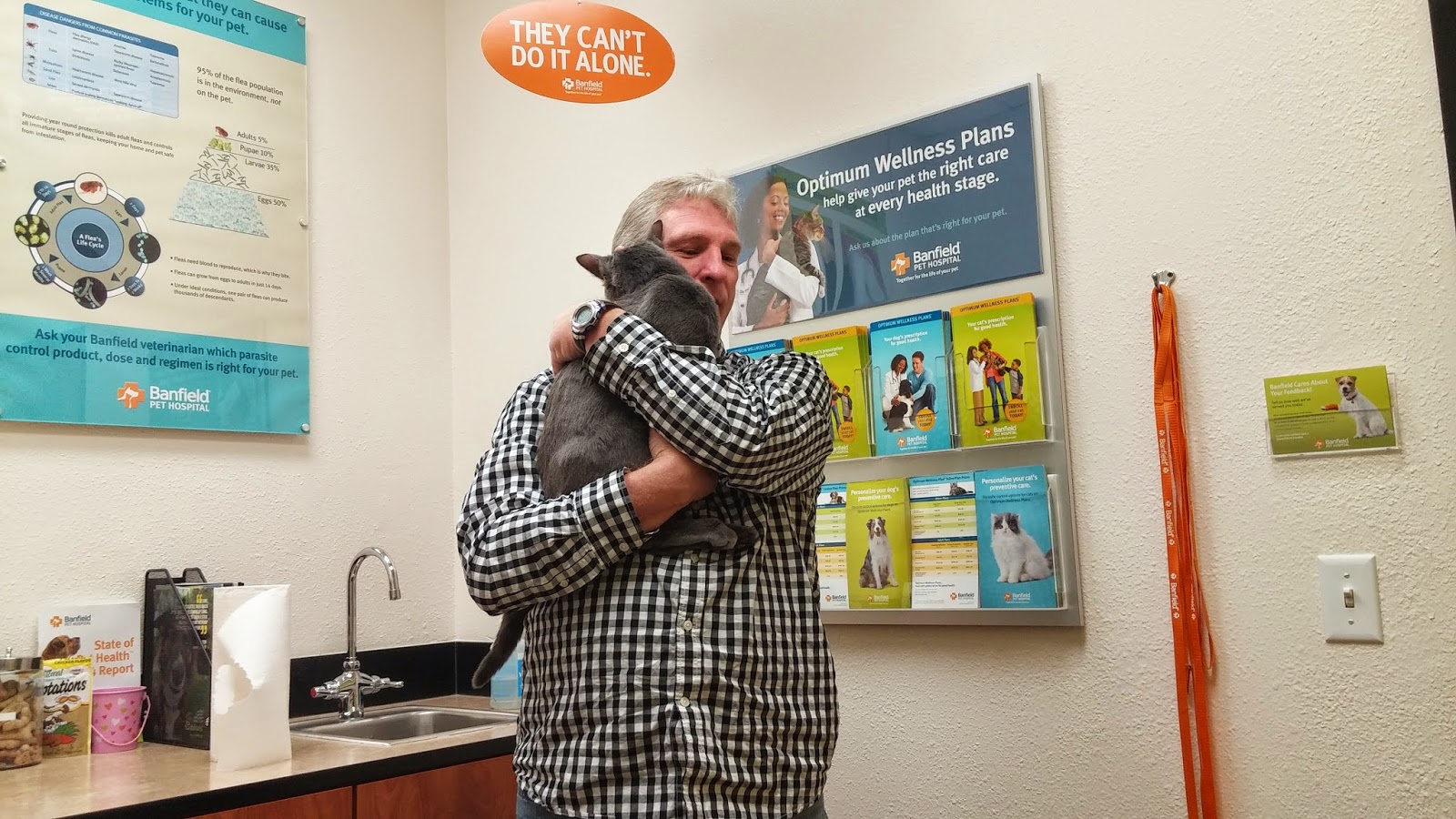 We ended up having to leave him there for the day so they could give him fluids and run the tests. The pancreatitis test came back positive, so they started him on antibiotics and pain meds. She didn't see anything obvious on the x-ray that would show a foreign body (which had been my biggest fear) but wanted it to be read by the experts before beginning him on anti-nausea meds. Luckily, the x-ray came back clear and they were able to get those meds in him too. At that point, the vet wanted him to stay until closing so they could monitor him.

When we went to pick him up, his temp had only gotten down to 102.5. He hadn't eaten anything, either. Dr. Long wanted us to bring him back the next morning so they could give him some more fluids and work on getting his fever down. She left the catheter in his leg and put a cone on him so he couldn't mess with it. 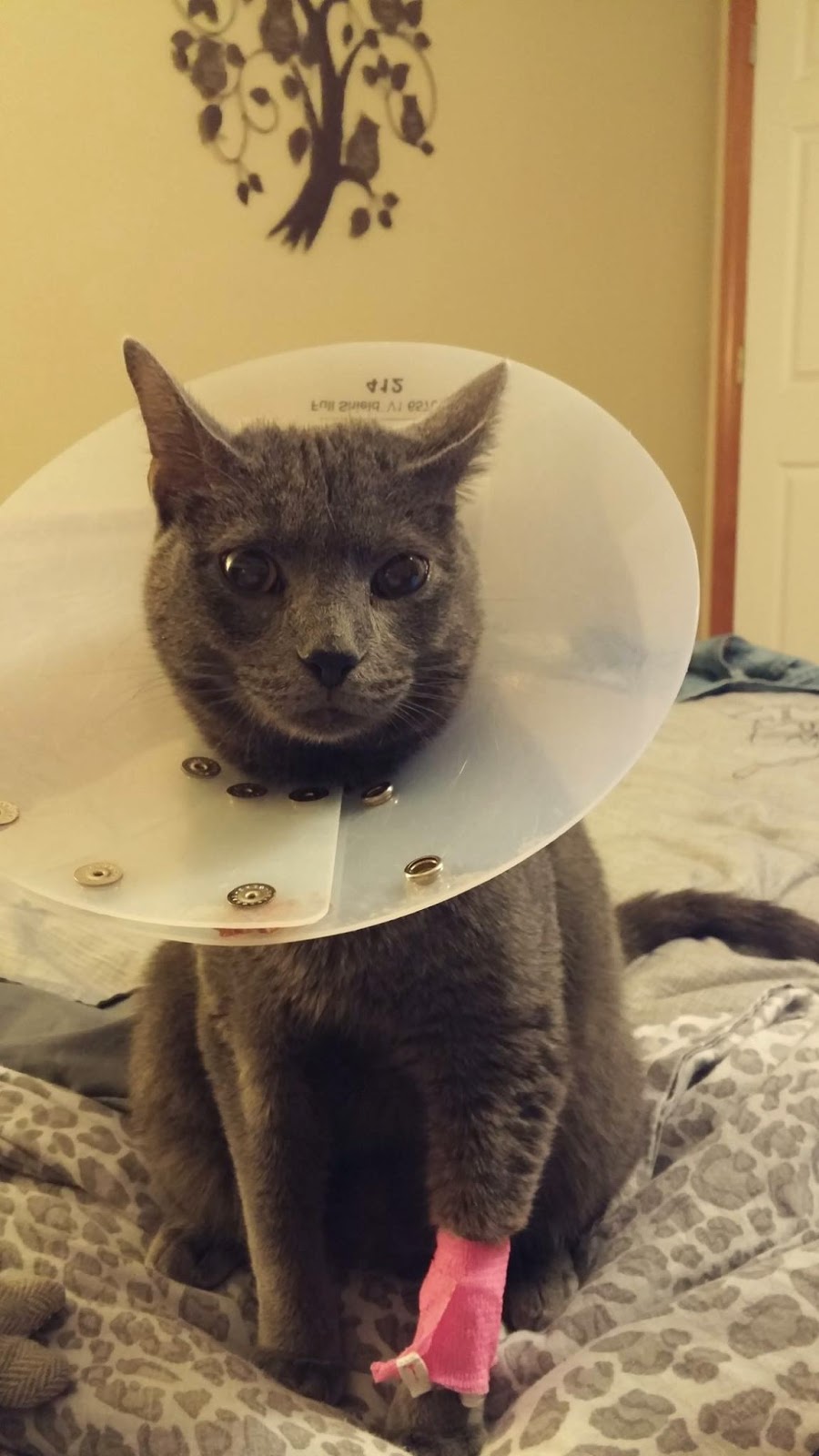 Once home, I offered Stilwell some canned food and he went right for it. He ate about 3/4 of a small can. After eating, he slept for the rest of the night.

TUESDAY
Lee took Stilwell in first thing in the morning and they got him going on fluids again. When he went back in, his fever was back up to 104, but by midday it was down to 102. When I called to check on him, they said he was really mellow.

I picked him up at closing again and at that time his temp was down to 100.2. The vet was very happy with that, but to be sure everything was okay, wanted me to bring him back the next morning to check his temperature to be sure it had stayed down. They sent me home with his antibiotic and pain meds, again leaving in the catheter and the cone.

He chowed down on dinner when we got home and he peed. He walked around the room checking things out-he was definitely feeling better. I gave him his meds and he settled in for the night. 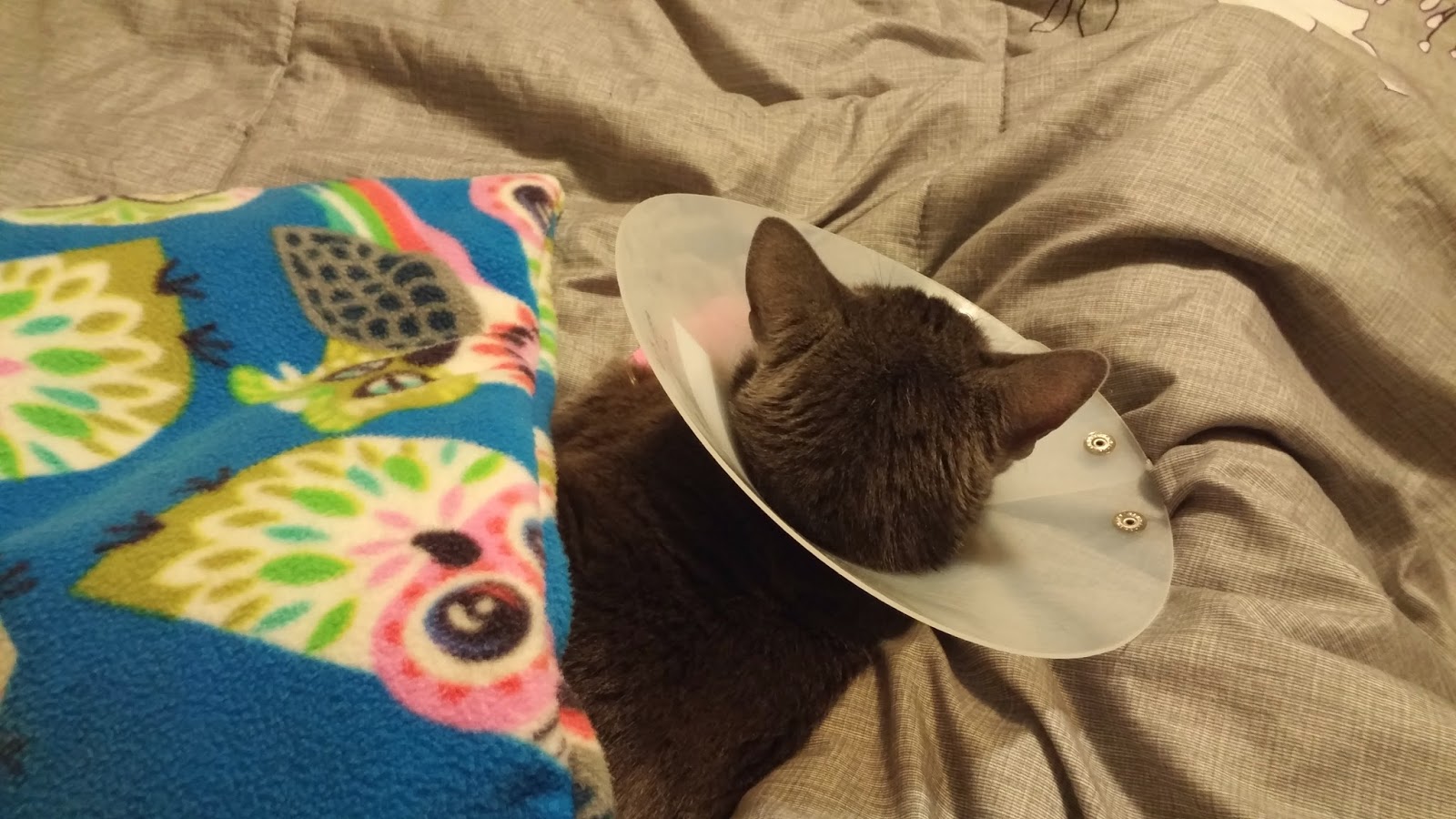 WEDNESDAY
I took Stilwell to see Dr. Long this morning and the news was good! His temp was down to 99.2. No more vet stays for him! The cone came off and the catheter came out.

Since being back home, he's done great. He's taking his meds like a good boy and he has eaten. He still isn't eating as much, but that's to be expected. He's also sleeping a lot, but he needs his rest so he can recover from all of this. He took the prime sleeping spot on a cold day: right on top of the furnace vent! 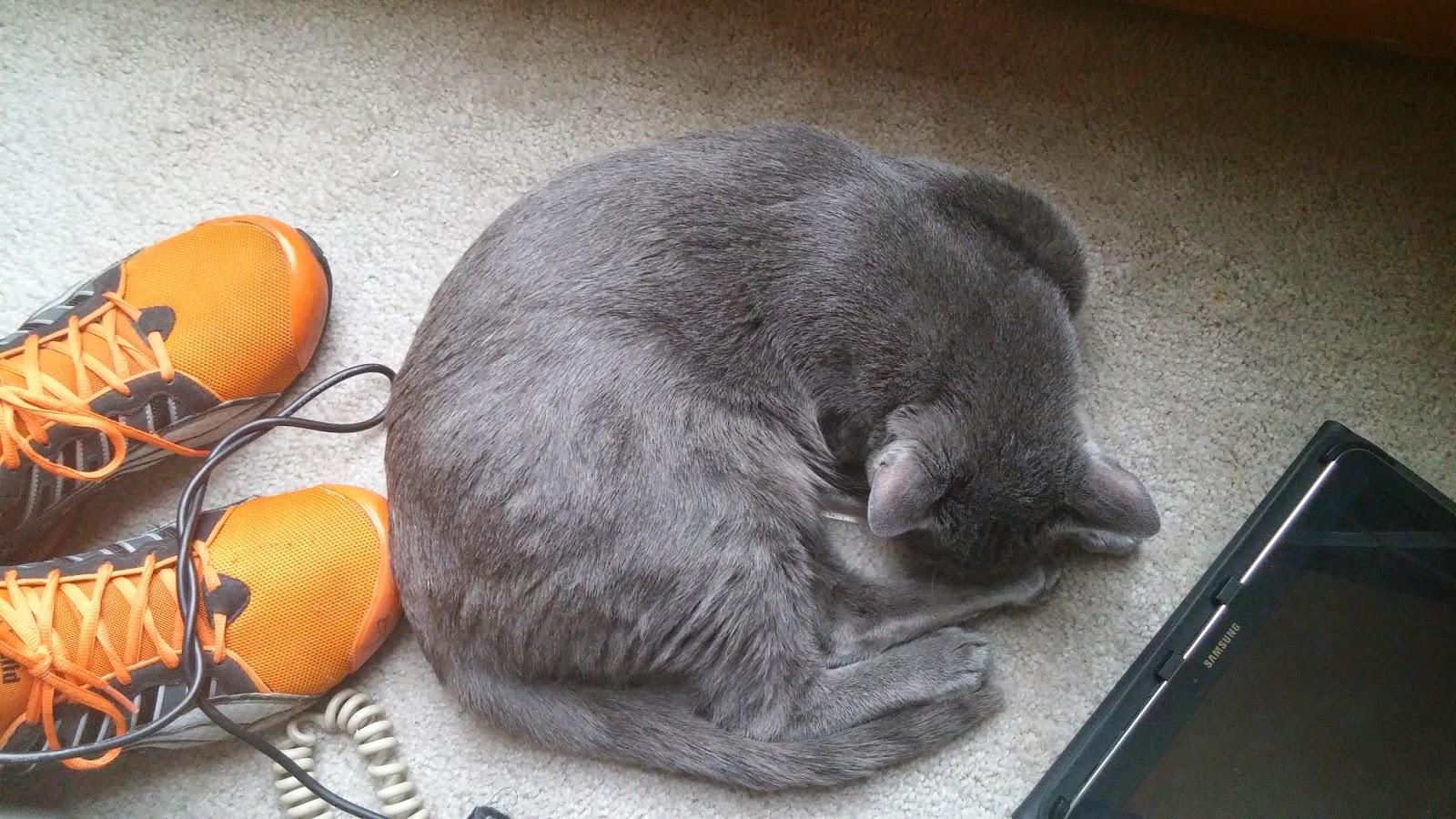 We would like to thank everyone for all of the good thoughts, purrs, and prayers. They certainly kept me upbeat through the last few days!
Posted by BoSoxAmy at 2:12 PM