I read two books for this month's #readpawty on Twitter. The first one was "Homer's Odyssey" by Gwen Cooper. You can read my review of it here. The second one was a cozy mystery called "Curiosity Killed the Cat Sitter" by Blaize Clement. 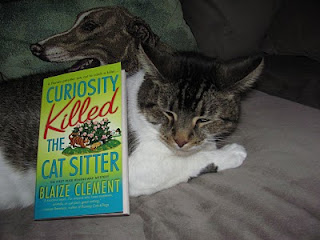 The cat sitter in the title is Dixie Hemingway. Dixie was a deputy in the local sheriff's department when her life was turned upside down. She left her law enforcement career to become a pet sitter and leave her former life behind. On one of her routine assignments checking on a cat named Ghost whose owner hired Dixie to watch her pet while she was out of town, Dixie discovers a dead body face down in the cat's water dish. All signs point to Dixie as a suspect; she had a key to the house where the body was found, nobody had seen her on her early morning assignments and she was already looked upon as a bit unstable in the community.
Dixie uses her skills she developed in law enforcement to dig deeper into the mystery of the dead man and Ghost's missing owner. Her questions come naturally, as does her ability to read people. Soon, she is getting in further than she should, but she can't stop the nagging thoughts about the case until everything finally becomes clear, with a little assistance from Ghost. (Of course she couldn't do it without the cat!)
Throughout the book, Dixie shows compassion for all the animals on her watch, but indicates that she doesn't want one of her own. Because of the recent upheaval in her life, Dixie can't seem to get close to anybody, including a pet. I bet if she gave a shelter kitty a chance, she would see it's worth it, but that's just my opinion! MOL.
The only thing I really didn't like about the book was how it was wrapped up after the case was solved. There were a lot of loose ends that I had to make assumptions about and I would rather have had some more details about the characters I had gotten to know in the story. I would have liked to have seen more details about Ghost especially, both during the story and at the end, but I guess it wasn't a book about a kitty, it just had a kitty in it. Overall, it was a fun mystery and I will check out the next book in the series, "Duplicity Dogged The Dachshund".
Posted by Sebastian at 7:39 PM