Voicing My Opinion on Declawing

This post takes a more serious turn than my other recent posts. I want to discuss the act of declawing a cat. In case you don't know, I am front declawed. I was already declawed when Mom adopted me and we don't know when I had the surgery. I don't have any problems walking or scratching in my litter box, but I do tend to put the bitey on Mom and Dad quite often. That may be a result of my being declawed-we just don't know.

Here's the deal. Declawing is a very controversial procedure. Mom has done a lot of reading and is finding a lot of conflicting facts. She finds numerous websites that are against declawing. They show diagrams of what occurs during the declawing procedure (the technical term is onychectomy), pictures of paws that have just been through the procedure and contain anecdotal evidence of the negative impact declawing has on a cat. It goes without saying that a declawed cat has lost one of its primary means of defense. There are also claims that declawed cats have increased biting behaviors, possibly to replace the loss of the use of their claws. Sometimes a cat who has been declawed will develop an aversion to the litter box, presumably because they find it painful to dig or scratch in litter after the procedure.
Other websites, like the American Veterinary Medical Association, say that there is no evidence proving that declawed cats have these behavioral abnormalities. You can see what they have to say in their statement regarding the declawing of domestic cats. They do say, however, that declawing should only happen only after other means of preventing destructive behavior have been exhausted and the owner is fully educated about the procedure. The same type of stance is taken by the American Animal Hospital Association in this statement.
I will let you make your own decisions about the validity of the information out there. Mom made up her mind definitively, not after reading all of these differing opinions, but after she met Tigger at Wayside Waifs Wednesday evening. 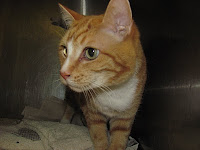 He's a seven year old orange tabby who was begging for attention. He's got quite a voice on him! Mom talked to him and gave him some treats, then she noticed he was holding up his left front paw. She thought he was hurt until he put it down. Then, he picked up his other paw in the same fashion. She took a closer look and was horrified at what she saw. 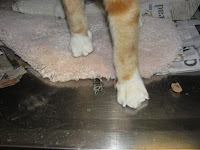 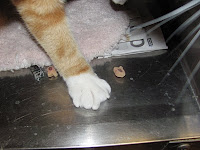 Tigger is front declawed and both of his front paws are deformed. They look like they have just been mangled and it is obvious that he is in pain when he stands on them. Mom follows Declawing CrippledmyPaws on Facebook, but holding this boy in her arms made the horrors real. 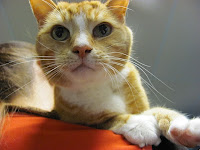 Please think about Tigger before declawing a cat. There are so many alternatives that don't involve amputation of the toes at the last joint. You can trim your cat's nails, give it scratching posts or use Soft Paws (or other similar nail caps). A cat shouldn't be subjected to the pain and possible deformation declawing can cause. 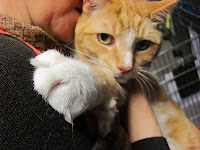 By the way, Tigger is waiting for his forever home at Wayside Waifs! If you have love to give to a kitty, Tigger is ready to give love back!

You can also check out my pal Ryker's blog where his Mom also posted about Tigger.

Posted by Sebastian at 9:53 PM