The Sweet Sound of a Midwest #MOBlogPaws

Many thanks to Sebastian for allowing us to pawticipate yet again in the ongoing campaign to bring BlogPaws to Missouri in 2103.

Reason # 2309675 (or thereabouts):
The Kauffman Center for the Performing Arts 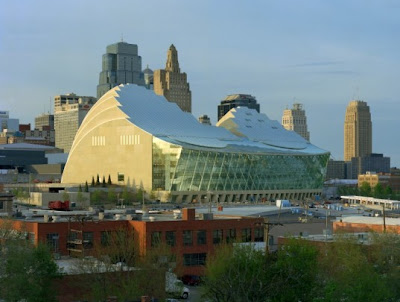 Designed by the famous architect Moshe Safdie and in collaboration with renowned acoustician Yasuhisa Toyota, this facility was designed to produce near perfect acoustics. Pretty impressive for a midwestern town, huh?
My human knows someone who's been involved in filming the story of its construction and he tells us that there is a magnificent pipe organ designed specifically for this space by the renowned Casavant Frères company. 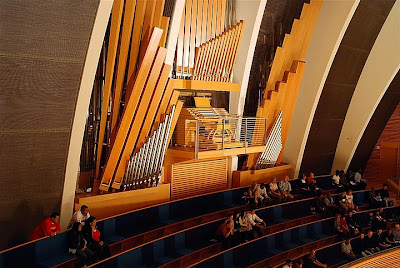 The organ has 5,000 pipes, partially housed in a secondary building behind the Center that is 4 stories tall. And it took 6 weeks to tune, or "voice" the instrument to the fabulous acoustics of the hall!
The famous architect, Moshe Safdie, had this to say about the design of the building itself:

"The opportunity to design a major new performing arts center was precipitated by two significant decisions: the selection of an extraordinary site...and the decision to construct two dedicated halls for symphony, ballet, opera, and theater.

Each [of the two halls] reads as a distinct volume; metaphorically evoking a musical instrument and visible through the glass shell.

As the natural light changes, so does the building's transparency, reflecting the structure's surroundings and, at the same time, hinting at its interior.

At night, the entire building becomes inverted, displaying all of its interior activities to the community outside." 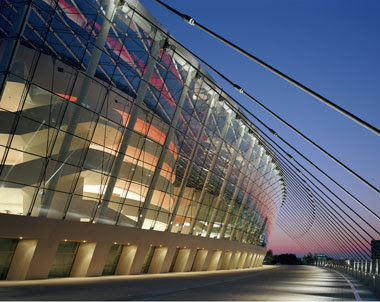 We think this is another pawesome reason for BlogPaws to be hosted in Missouri. Wouldn't you want to come hear a concert at one of the most acoustically perfect venues in the world?