Recently when Mom was volunteering at Wayside Waifs, another volunteer brought in some fleece blankies she bought at a STEAL! Her idea was to make some no-sew blankets-you know, the kind that are tied all along the edges. They were going to be especially for the kitties waiting for adoption. Mom thought this was a great idea and so did a couple other volunteers. They got right to work in the sun room at Wayside. 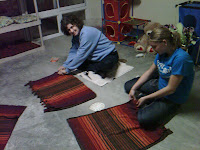 They wanted the blankies to be purrfectly kitty-sized, so they took each blanket and cut it into four blankets. Then they took the different patterns and put them together so they would look nice with a solid color on one side and stripes on the other. 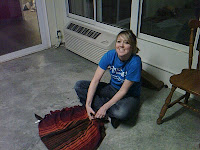 They giggled and laughed the whole time they were making the kitty blankies. None of them knew what they were doing, but boy did they have a good time! Even one of the available cats helped them. 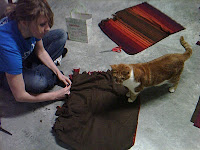 This is Simba holding down some material for Lindsay. He checked out all the blankets and made sure they were comfy enough for the kitties.

It took a long time, but soon they had four blankets done and they all gave the blanket they made to a special kitty. Simba got the one he helped Lindsay with. Mom gave hers to Anderson. 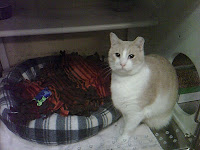 Aren't volunteers the best? They all love the kitties very much and make sure they have something special, something that is just theirs, while they stay at Wayside Waifs. In fact, Anderson is going to get to take his blankie home with him when he finds his forever home-Mom said so!
Posted by Sebastian at 8:11 PM