For the upcoming #readpawty, I just finished "Dewey's Nine Lives: The Legacy of the Small-Town Library Cat Who Inspired Millions" by Vicki Myron with Bret Witter. It is a follow-up to their best-seller "Dewey: The Small-Town Library Cat Who Touched the World."
"Dewey's Nine Lives" tells nine stories from people whose lives were touched not only by Dewey (either in pawson or through his book) but were touched by cats in their own lives as well. These aren't simply cat stories, either. They really reveal the person and what their life is like. It's not always pretty, but the story is more complete that way.
My favorite story was about all the cats living at the resort on Sanibel Island. What a wonderful life they had! Mom really liked the last story-there was a surprise twist, so I won't give it away. I knew it really touched her though by the way she said "Ohhhh!"
This was a great book, but I would suggest you read "Dewey" before you read "Dewey's Nine Lives". You'll need your tissues for both! There are also some children's books about Dewey: "Dewey: There's a Cat in the Library"; "Dewey: The True Story of a World-Famous Library Cat"; and "Dewey's Christmas at the Library".
If you want more information about Dewey, you can check out his website at http://www.deweyreadmorebooks.com/ or the website for the Spencer Public Library, where he was abandoned, found by Ms. Myron, and lived for many years.
Dewey is one cool cat! Read his books and tell me what you think! 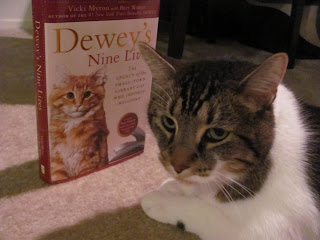