Tex is a big boy. 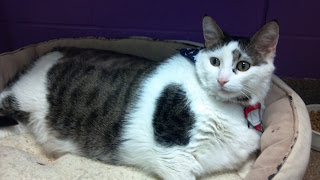 When he first came to Wayside Waifs, he weighed over 30 pounds! Now, he's on a diet. He eats low-cal kibble and treats & wet food are a big no-no. The volunteers try to get him to exercise, but he's not much into moving around yet.

Tex will need a home that is willing to keep up with his weight loss program. At five years old, he has the potential to live many more years, but like humans, his obesity puts him at risk for health issues. 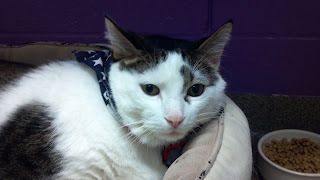 Tex's previous owner was a man and from his reaction when Dad met him, Mom thinks he is a "man's cat" meaning he might like a home where there is a man rather than just a woman. He's a little shy and likes to be hidden away, but if people go slow with him, he likes to be petted. In fact, when Dad was petting him he purred and purred.

Tex will make a great companion and will do well in a home where his family pays close attention to his eating and exercise habits. Maybe he'll even get skinny enough that he won't be "as big as Texas" like his kennel card says! 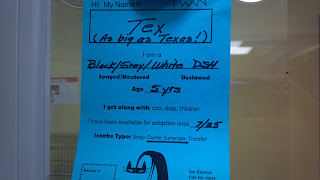