Hi there, Pals. It's been a long time since I've blogged, but there's a very good reason. Six weeks ago tomorrow our life was turned upside down. It seemed like a normal Thursday evening at home. Mom and I were sitting on our cool new loveseat with the laptop. We were talking on the phone with Grandma when Mom realized something wasn't right. She could hear a lot of commotion outside and thought it was the downstairs neighbor kids being rowdy again. Then she saw a police car come by our building with its lights on. Mom, being a cop, thought there was a crime occurring. She quickly got off the phone with Grandma and went out the door to see what was happening. She saw one of the downstairs neighbors and a man she didn't know. Mom said, "What's going on?"

"My floor is on fire!" the frantic neighbor girl said. Mom went right into action. She knocked on our three neighbors' doors on our level. Only one person was home, a lady with a little dog. Mom told her there was a fire and to get out of the building, then she came back to our apartment.

Mom grabbed my carrier from under the table and put me in it. She kept saying "Everything's okay, but we have to go." She went to the closet and got the pet emergency kit she has been planning on blogging about. She also grabbed the laptop from the loveseat and through it in its bag with its charger. Her phone was plugged in right there too, so she grabbed them and through them in the bag.

Mom had just bought some hay for Dottie, so she opened the bag and put the hay in Dottie's hay bucket. Mom then grabbed her prescriptions and through them in her purse. She took the hay bucket, pet emergency kit and computer bag and set them outside the door. When she did, she looked downstairs she saw a police officer-and he saw her too. He pointed at her, realizing there were people upstairs. Mom ran back in the apartment, knowing that the officer was going to come after her. She wanted her gun and badge with her, so she ran to her office to get them. That's when the officer came in yelling for her to get out and that there was nothing in the apartment worth dying for. Mom ran back to the living room and asked the officer, "Will you get my guinea pig?" As he picked up Dottie's cage, Mom grabbed me and her purse (plus all the stuff outside the door) and we all ran downstairs.

By this time the firemen were there trying to stop the fire from spreading. Mom put me and Dottie in the SUV where we would stay for a couple of hours. We were blocked in by a fire truck and had no choice but to stay and watch the devastation. Mom called our friend and neighbor Kathi (@CJLegendKitty's mom) and told her to come home. Dad heard the news from some other neighbors and he came home too.

Mom was purraying very hard that they would get the fire put out soon. She really felt like they would save our apartment. That didn't happen though. The wind was blowing VERY hard that night and it was just too much for the firemen to get under control. It spread quickly to other parts of the building. 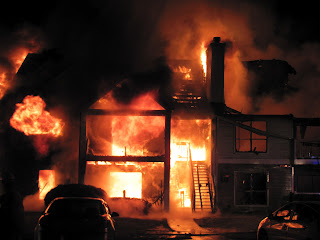 Soon, there was nothing left. Mama knew we had lost everything and we would have to start over the next day. But at least we were all together. 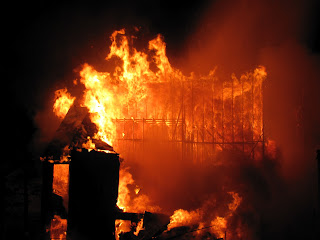 That night, we went to a hotel. It was my first time staying in a hotel! Mom had a blanket for me, a litter box, plus food and water. Things were very strange. Mom cried when she went to bed. I didn't like not being at home, so I slept on the bed between Mom and Dad.﻿


The next few days were very strange too. During the day, we went to a friend's apartment. I got to wander around there while Dottie stayed at the hotel. We stayed two nights at the hotel, then we moved into our new apartment. It was strange too. It smelled funny and there was no furniture.

Soon, friends started sending us care packages. I got lots of beds, treats, and toys to replace all the stuff I lost in the fire. It took a long time to get my scent on everything. About a week later, we finally got furniture and that made things seem more normal.

Mom and Dad are gone a lot still. They have to go shopping all the time to replace everything. Dad says they'll be done soon and they will be home more with me.

I'm doing good, though! Mom was very proud of me because I didn't have any accidents or anything during the upheaval. I was just happy to be with my family still! Mama is sad over some of the things we lost, but she knows how blessed we are that things worked out the way they did.


Mom, Dad, me, and Dottie would like to say a big thank you to everyone who helped us. Whether you sent us gifts, donated to the chip-in, checked on us to make sure we were okay or prayed for us, it was all appreciated. We never could have made it through without all of you!
Posted by Sebastian at 11:39 PM