Since this is the final day of Adopt A Less Adoptable Pet Week, I thought I'd introduce you to a few pets in my Mom's life that some people may have seen as "less-adoptable", but to her they were very adoptable!

First is Oscar. Mom had him before she had me, while she was living in a different city. Oscar is a Borzoi that was 2 years old when Mom got him. He had never been a "pet", instead he was raised to be a show dog, but had too many faults. The breeder gave him to Mom on the condition that Mom would pay to have his papers changed over and have him neutered. 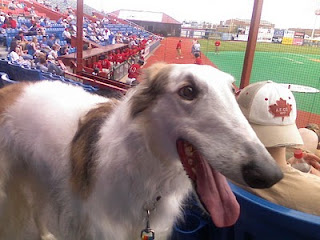 Mom fell in love with him right away, but things were difficult from the very beginning. Since he wasn't raised as a pet, he had never been inside a house until the day Mom went to get him. He didn't know how to act in a house and had never encountered stairs. The whole idea of being indoors was very unnerving for him and his entire life, he never spent much time inside.

He had been cared for by one person before Mom adopted him, so it was hard for him to bond with people and was frightened of most humans he came into contact with. Most people would have considered Oscar too neurotic to make a good pet, but Mom's patience and understanding paid off and they developed a strong bond over the 6 years they spent together. Unfortunately, I never got to meet Oscar because he passed away due to cancer 3 years ago.

After Oscar went to the Rainbow Bridge, Mom's dad was anxious for her to get another dog. Mom wasn't ready yet, so Grandpa decided he would adopt one of his own. After reading a story in the local paper about black dogs having a harder time finding their forever homes, he made up his mind that he would find a black dog to adopt.

Mom, Grandpa, and Grandma all went to the Kansas Humane Society in Wichita one afternoon and that's where they met Yaz, a corgi mix. 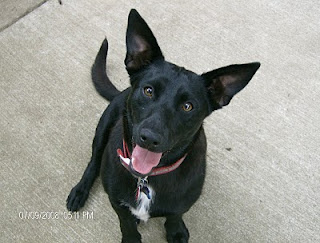 His name when they met him was Flash and Grandpa decided he liked his friendly demeanor. They decided to change his name and Mom suggested Yaz, after a former Red Sox player. Grandpa agreed and Yaz became part of the family. He has been a great pal for Grandpa and Mom loves to visit him. He's a spunky, fun-loving little dog that makes everybody who sees him smile!

Of course, the most recent "less-adoptable" pet Mom has let into her life is me! When Mom and I met at Wayside Waifs I was 7 years old. It's easy to overlook a chubby, mature kitty that just wants to lay around and cuddle when there's so many frisky kittens around. But Mom saw something in me that she connected with and I did my best to convey what a good kitty I would be. The rest is history! 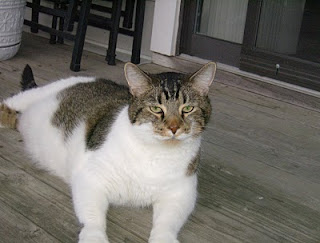 I hope you remember these success stories when you are looking to adopt your own pet. Pay close attention to ALL of the pets who are looking for their forever homes. You never know what you could be missing if you pass up a pet who seems "less-adoptable".
Posted by Sebastian at 8:40 PM