Today is the one year anniversary of Mom's kitty Rosie making his journey to the Rainbow Bridge. He has been on her mind a lot and she thinks that he has been visiting her. Recently, he appeared to her in a dream. Unfortunately, he was old and ill, near the end of his life. Mom would have preferred that he appear young and healthy again, but it wasn't to be. The one thing that she found comforting is the fact that he looked her right in the eye and they had that moment of connection. 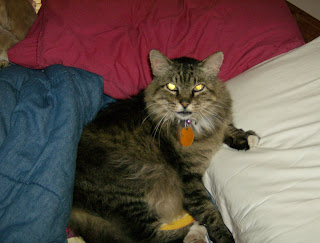 Another time Mom thinks Rosie was around was a couple of months ago in the bedroom. Mom keeps three boxes of ashes on a shelf in there: one box is Rosie, the other two were her dogs. Each box has the pet's collar on top of it. Twice, the first instance within a week of the second, Rosie's collar was on the bed. The first time, Mom walked into the bedroom and saw the collar on the bed. There was no way for it to fall there, as the bed is not under the shelf, but a couple of feet to the side of it. The next time was a bit spookier. Mom was standing by the bed with her back to the shelf. She was wrapping her hair up in a towel and heard a jingle. Since the towel was over her ears, the sound was muffled. She looked down and there was the collar on the bed once again.

Mom has no way of explaining these occurrences. It is even more baffling that the only collar that has moved from the shelf to the bed is Rosie's, not either of the dog collars. She figures it is his way of saying he is still around.

Mom misses Rosie a lot. He was with her for 17 years and it was very hard for her to move away and leave him with Grandma and Grandpa. She always felt like she abandoned him because she couldn't explain to him why she had to move. Even after a year, she still looks for him when she visits Grandma and Grandpa.

He was a very different cat than I am. Mom said he was street smart and that he understood English (more than just his name and words like "treat" and "outside", he was fluent). She said he was independent and did everything on his own terms. He was a tough guy. Now he's a kitty angel, letting Mom know, on his terms, that he's always with her.
Posted by Sebastian at 12:00 AM