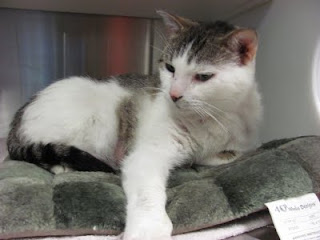 This is the second post in a series about Valentino, Mom's favorite kitty at the shelter where she volunteers and his journey to the Rainbow Bridge. The first part is here.

When the time came on Thursday, Mom went to the shelter and went directly to Valentino's kennel. She spent about 20 minutes with him, cuddling and kissing him, telling him what a good kitty he was. She explained the Rainbow Bridge to him and told him that Ryker would be there to greet him, along with many other animals. She said he could run in fields of catnip, eat an endless supply of tuna and that he would never be sick again. Mom told him that since he didn't have a family of his own to wait for at the Rainbow Bridge, that he could wait for her and she would be his family. She said they would be together again when the time came.

After a few treats and lots of petting, Mom went to tell Dr. Pickett that she was there. She went back to Valentino and the vet came in shortly after to give him a sedative to relax him, then left the two of them alone again. He rested on his bed and was soon snoring away, Mom still petting him and talking to him, giving him kisses on his cheek. After a few more minutes, Dr. Pickett came back with another vet. They brought Valentino out of his kennel to give him the final injection. Before Dr. Pickett started, Mom bent down close to Valentino's ear when the vet told her "He can still hear you. You can keep talking to him." Mom couldn't hold back the tears as she stroked Valentino and told him what a good kitty he was. She continued to talk to him about the wonderful things at the Rainbow Bridge until he left this world and his earthly body behind. Dr. Pickett moved him back to his kennel on his soft bed and covered him up. Mom spoke with him about what would happen with Valentino's body. Among several options, Dr. Pickett told her that he could be cremated by himself and she could get the ashes. Mom liked this option, but had to consider Ryker and Allie's mom's wishes as well as the financial side of it. They agreed to speak the next day about her decision, then Dr. Pickett told her she could have as much time with Valentino as she wanted.
She only stayed with him for a few minutes, feeling relieved that it was over and Valentino would never be sick again. She wanted to speak with the adoption counselor, Sharon, who is so loving and caring (she took great care of me while I was there!). Sharon immediately called the memorial services section of the shelter and worked it out with Danny to have Valentino cremated by himself at no cost! Mom was very touched that they would do that. She gave Sharon a big hug and told her that she would check back the next day.
On her way home, she stopped and bought a white candle and some white spider mums. Once home, she lit the candle, laid the flowers beside it and placed a magnet with Valentino’s likeness with them. We had a little memorial service for Valentino, thinking about how he was surely enjoying his new life at the Rainbow Bridge. It wasn’t much, but we knew we needed to honor the memory of this kitty who never had a home. 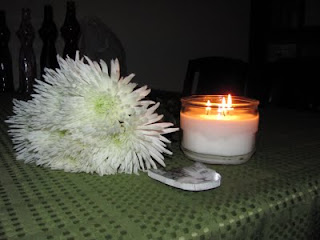 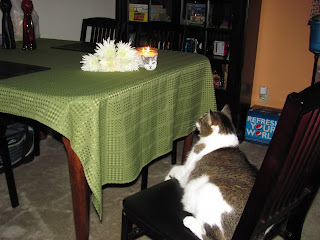 Tomorrow I will post the last part of this series about Valentino.
Posted by Sebastian at 8:22 PM