Valentino's Journey to the Rainbow Bridge 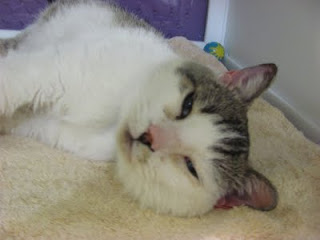 Many of you were aware of the sad news I shared on Twitter last week. Valentino, Mom's favorite kitty where she volunteers-her shelter love-was quite sick and had to be euthanized. We had such an outpouring of thoughts and pawprayers that I thought I would fill everyone in on the details. This will be the first post in a series about Valentino.

Mom visits the shelter every Wednesday. Last Wednesday she knew that Valentino was not on the adoption floor as he had been moved to a back area the week prior for what was believed to be a case of ringworm. Valentino had been dealing with some fur loss so they decided to quarantine him while he was being treated for the sake of the health of the other cats in the adoption area. She was saving him for last to go and visit so she wouldn't cross-contaminate the healthy kitties. Before she could visit him, though, she was paged over the intercom to go to the lobby. When she got there, the vet (Dr. Pickett, who I've mentioned before) was waiting for her. He verified that she was close to Valentino and took her back to see him.

When they got to Valentino's kennel, Dr, Pickett explained that Valentino was a very sick kitty. Mom was aware of his recurring upper respiratory infections, his bouts of lethargy and the fact that he had a herpes virus. Dr. Pickett went on to explain that he felt Valentino had feline leukemia, but that it was in his bone marrow and not showing up in the two blood tests they performed. Because Valentino had been picked up as a stray in an area known for a high number of cases of feline leukemia, Dr. Pickett was certain this was another one of his issues. He told Mom that he felt Valentino wasn't adoptable. He even spoke of a family who wanted to adopt him, but chose to go with another cat when his health issues were disclosed.

Mom understood the situation and knew that Dr. Pickett felt that euthanizing him was the most humane option. Mom looked at Valentino's eyes and could see how sick they looked. He had never been the most handsome kitty; his coat always seemed dirty and he felt grimy to the touch. He was a lover though and she couldn't resist petting him, no matter what his fur felt like. She agreed with the vet that Valentino didn't have a good quality of life; always sick and feeling poorly. Dr. Pickett said he would perform the procedure the next afternoon and Mom agreed to go in to be with Valentino as he made his way to the Rainbow Bridge.

Mom was miserable all Wednesday evening. She knew it was the right thing, but her heart still ached. She called her friend who volunteered at the shelter and also found Valentino to be a special kitty, @Ryker_Tyker and @Allie_Kitti's mom. She was out of town, but Mom felt she should know since the vet had wanted to speak to her as well. They discussed the situation and both tried to hold back the tears that continued anyway. Their shared love for this shelter kitty was obvious and the sadness was very real. They both knew how hard the next day was going to be.

Tomorrow I will continue the story of Valentino's Journey to the Rainbow Bridge with a recounting of Thursday's events.
Posted by Sebastian at 6:34 PM