Today's guest blogger is Bonnie Still who leads the Feline Comfort Crew at Wayside Waifs in Kansas City. All the kitties tell her their special requests. She's going to share about Alex, who was adopted despite being "less-adoptable."


For 1 week, I fostered a 10 month old kitten named Alex.  He had been surrendered to Wayside Waifs in Kansas City, Missouri because his owner had to move.  Before I met Alex, one of the ladies I work with told me I would immediately fall in love with him, but did not mention anything “different” about him.

Alex was in the C.A.T. room (Cats Awaiting Transition), one of the rooms new cats are housed until they are ready to move to the adoption floor.  I walked in and said hello to all the cats, including Alex.  I didn’t notice anything “different” about him, he was lying down watching everything.  My co-worker had said Alex was fine to be let out into the room, so when it came time to clean his kennel, I opened the door, and out walked this shaky, wobbly, kitten.  I then looked at his paperwork and saw that he had Cerebellar Hypoplasia aka Wobbly-Cat Syndrome.  The vets told me Alex’s condition was mild.


Usually symptoms of cerebellar hypoplasia can be seen immediately at birth in cats, but sometimes can take two months or so to become apparent in dogs. Cerebellar hypoplasia causes jerky movements, tremors and generally uncoordinated motion. The animal often falls down and has trouble walking. Tremors increase when the animal is excited and subside when at ease.


There are several bacterial infections and viral infections such as feline panleukopenia, caused by feline parvovirus,[1] that can result in the disorder in both cats and dogs. However, the disease can also be caused by malnutrition, poisoning, injury or general accidents during development in the fetus.


The disease does not get better or worse with age, but the cat or dog can usually learn to somewhat compensate for it and should have a normal lifespan. Most afflicted animals can lead a fairly normal life if special considerations for the animal's disability are taken by the pet's owner.


I had seen much younger kittens with CH at the shelter before, but this was the first time I’d seen an older cat/kitten.  For some reason, this made me more emotional towards a cat than normal.  Maybe it was because he wasn’t a stray that had been brought in, but someone had owned him, and gave him up.


I watched Alex walking around the room.  I realized he was wobbliest when he first came out of his kennel, but as he continued to move around, it lessened.  I picked him up and snuggled right into me, purring and making biscuits (kneading with his paws).  Yep, I fell in love completely.

The following day, I found out that before Alex could move to the adoption floor, we had to know for certain that he could use his litterbox consistently.  I offered to foster him, and within a few days, I was able to take him home with me.


Alex did very well in my home, using the litterbox consistently and properly.  He enjoyed snuggle time and play time.  It was a new experience for me.  I was used to allowing a cat to go wherever s/he wanted in our basement, but I couldn’t do that with Alex unless I was there to supervise him.  He was not afraid or timid of anything, I was the one constantly worrying!  Nothing stopped Alex. When he first saw the stairs, his eyes lit up.  He was cautious at first, and then became so confident that I had to stop him before he would overdo it and possibly hurt himself – he was not happy with me for that.


I had researched CH and found a fantastic yahoo group devoted to CH cats.  http://pets.groups.yahoo.com/group/chkittyclub/  These cat owners are phenomenal!  I was blown away by their passion for these cats, and the extremes they would go to for them to have a safe, comfortable, loving home.  They offered so many wonderful tips.  One of the most important ones I probably never would have thought of – CH cats can not have their nails trimmed short – they need them to pull themselves up onto furniture.


Our last day together in my home, I brought him upstairs into our den.  I watched him shakily reach up to look out the window, and then pull himself up onto the futon to curl up next to me for a nap.  That is one of the sweetest fostering moments I have had and will always cherish. 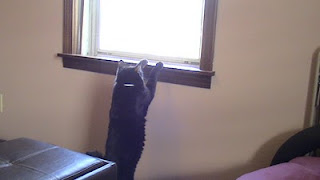 I love all the cats that I have fostered, but there is definitely a special place in my heart just for Alex.  He taught me to not feel sorry for him, but to encourage and help him.  I also learned it takes a special person to adopt a CH cat.

Thank you Alex, for allowing me to be a small part of your life.  Alex was adopted a few weeks after being fostered!

Thank you, Ms. Bonnie for telling us about Alex and CH. I bet you miss him, but you helped him find his forever home by sharing yours with him for a week.

CH kitties need a little more supervision, but an experienced cat owner could be a great match for a wobbly cat. Please consider these special kitties when looking for your next family member!
Posted by Sebastian at 12:00 AM