Today's guest blogger is none other than Ryker's mom, Lisa Richman from A Tonk's Tail...er, Tale... and Mom's partner in crime at Wayside Waifs. She's going to share about Arnet, a kitty with calicivirus.

Meet Arnet, a 3 month old darling who’ll purr her way straight to your heart! Arnet was almost adopted a few days ago…until they learned she had just recovered from calicivirus.
Calici is one of two viruses responsible for most upper respiratory infections, or “kitty colds,” in cats. (The second is feline herpes virus or FHV-1.)


Don’t blame the adopters – this time. They have an older cat undergoing treatment for cancer. In their case, with an older cat who has a compromised immune system, it was the right thing to do.
But most cats have healthy immune systems. And many cats have not only been exposed to calicivirus, they’ve been vaccinated against it as well.  Responsible cat owners continue to vaccinate against it annually.
Every feline wellness exam includes FVRCP, the core vaccine that inoculates kitties against both calici and FHV-1. And while it can’t guarantee your cat won’t ever catch the kitty flu, it’s a good way to ensure that any upper respiratory infection they come down with is much milder.
Does this make Arnet less adoptable? Yes.
A responsible shelter has to provide full disclosure to any potential adopter, and that full disclosure includes the fact that a cat infected with calicivirus can become a lifelong carrier. And those are scary words to the uninformed.
Here’s what those words don’t mean.
They don’t mean a cat like Arnet is contagious all the time.
In fact, barring any stress in this young lady’s life, it’s possible she’ll never show signs of calici again.  Usually after the age of three these kinds of infections are mild or asymptomatic, according to one feline medical journal. 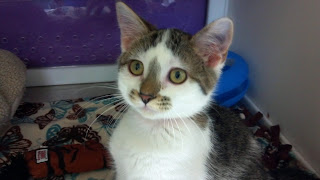 However, things happen. A move to a new home. The introduction of a new pet – or a child – to the family. Disruption in routine. These stressers could cause Arnet’s calicivirus to flare up. If she were to get sick again, then it’s important that Arnet see a vet…for the same reasons you’d take your child to see a doctor if she came down with the flu.


And just like the flu, calicivirus symptoms can include a runny, snotty nose, sneezing, lethargy, a fever, achy joints and disinterest in food. Like your child, you’ll want to push the liquids, make sure they stay warm and rested, and get plenty of good things to eat. Unlike your child, you can’t exactly tell a cat she needs to eat and drink more! Food doesn’t taste as flavorful when your nose is all stuffy whether you’re human or feline…so warming it a bit may help entice her to eat.


I speak from experience. If you’ve read my blog on deaf cats at A Tonk’s Tail…err, Tale… then you’ve met Maxwell and heard about his early run-in with ear infections. What I didn’t mention in my blog was that poor Maxie also came down with calicivirus in the middle of it all! (Have you ever heard a snotty cat purr? *purr SKRANKKKK purr SKRANKKKK* Kinda noisy…) But today he’s hale & hearty, and my vet’s not a bit worried about our other cats contracting it.

Bottom line: do what you can to educate potential adopters. Often it’s the unknown that’s the boogeyman in the closet. Shed a little light on medical conditions like calicivirus and FHV-1 and help adopters understand it’s not something they necessarily need to shy away from.

I have great news! Arnet went to her forever home yesterday! She was adopted by a Wayside Waifs volunteer who has renamed her Cloe. What a lucky girl! There are other kitties out there like Arnet though. Make sure everyone knows that calicivirus doesn't have to be a reason to NOT adopt a cat.
Posted by Sebastian at 12:00 AM